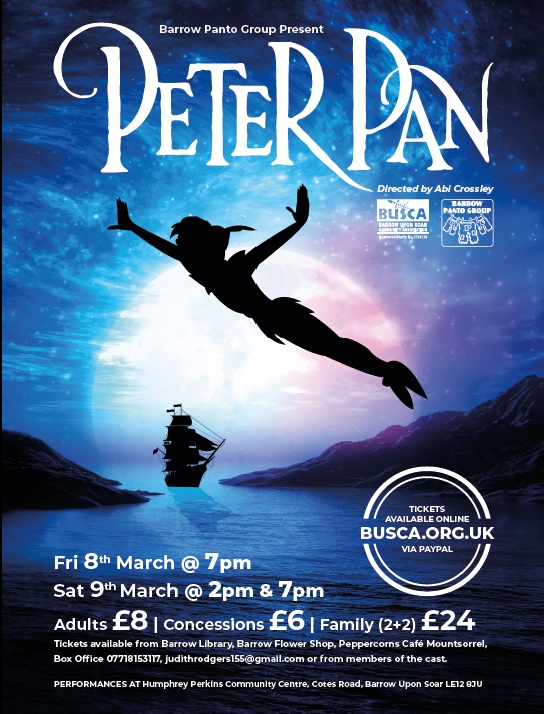 This is a magical and very funny pantomime version of the novel by J.M. Barrie. It is largely faithful to the original story with the addition of a dame, Nana, the new nursemaid who has replaced a dog, leading to lots of ‘doggy’ jokes. Captain Hook is the best kind of panto baddie and his pirate sidekicks are suitably stupid. The pirate comedy duo Line and Sinker are chased relentlessly by the Indian squaws Shy-Ann and Sioux. There are lots of opportunities for slapstick including a traditional ‘He’s behind you’ scene, a mop drill on board ship and a scene with a large inflatable fish.

If you want the full story (in case you can’t make sense out of our production!):

The play begins in the nursery of the Darling household in London, where Wendy, John, and Michael are going to bed. They are surprised by the arrival of Peter Pan and the fairy Tinker Bell. Peter has come to retrieve his shadow, which he had previously lost there. Peter reveals that he lives in the Never Land as captain of the Lost Boys. Invited by Peter to come to the Never Land to tell stories to the Lost Boys, Wendy and her brothers fly with Peter to an island populated by, in addition to the Lost Boys, villainous pirates led by Peter’s sworn enemy, Captain Hook; a crocodile that had been fed Hook’s arm by Peter Pan and wishes to eat the rest of him (but has also swallowed a clock, the ticking of which can be heard when the beast is near); Tiger Lily, leader of a band of “redskin braves” who is also in competition with Wendy and the jealous Tinker Bell for Peter’s affection; and mermaids. Peter, however, shows little interest. Magical adventures and pirate attacks take place. At length the Darling children decide to return home, but they are captured by the pirates. The boys are made to walk the plank and Wendy is tied to the mast, but Peter Pan rescues them, and the boys kill all the pirates. At last the children return to London, leaving Peter Pan to his perpetual boyhood.

Tickets cost is still very reasonable: Standard £8; Concessions of every sort £6; Family (2+2) £24. You can buy them by PayPal or card HERE, or from the Flower Shop, High St, or Barrow Library or from members of the cast. Enquiries and Box Office: 07718 153117

For more information and tickets, go to Future Events